If you want to know how to promote a music video on YouTube, it can be confusing. I wrote this article to spell out how the model works using real musicians. So it’s proven and repeatable. Anybody can do it. You don’t need special connections, a label backing you, or a marketing budget. In fact, you don’t need to spend a dime.

There are three videos that go along with this article. They piece together how independent musicians promote a music video on YouTube and literally, make millions—watch each video in order from top to bottom (beginning with the video below). By the end of the third video, you’ll know exactly how they do it.

To explain everything, I broke the article into three sections:

To promote your music videos for free on YouTube, you need these three things:

Rule #1: Promote A Music Video On YouTube By Borrowing Someone Else’s Audience

If you publish a music video and don’t have a following then nobody will see it. It’s nothing personal. It’s just logic. The way to get around that is to borrow the audience—and credibility—of someone else. How? By making music videos of you playing different cover songs.

For example, as you saw in the video one above, Lord of the Rings has a large audience—and an awesome soundtrack.

People love covers. This is how smart musicians promote their music videos for free on YouTube.

If a person has not heard of an artist before they don’t pay any attention. But if they see something familiar (ie Lord of the Rings), they will subconsciously associate the artist with everything they know about that other thing.

As you can see, in the screenshot below, the featured video has 49 million views. A lot of these people watched this because they heard of “Skyrim” not “Lindsey Stirling”—I was one of those people :)

How To Promote A Music Video On YouTube For Free

Rule #2: Promote A Music Video On YouTube By Following Trends

When something big happens in the world, and you find it interesting, make a video about it. Timing the release of your videos is important because you maximize their exposure. Keep your eyes open and pay attention to dates and new releases. Then, publish your videos to line up with them. When you do, more people will discover your music.

In the example above, Skyrim is a popular video game released on 11-11-2011. Lindsey published this music video a few months later,and people were searching for it on the Internet. They’d type “Skyrim theme song” into Google search and this video would pull up in the search results. That’s why it’s so important to time your releases. You’ll benefit from the organic “buzz”.

A recent podcast guest used this strategy perfectly. He created a massive fan base in 24 hours thanks to a timely release and a viral music video. Click Here to listen to the episode and discover how he did it.

This strategy combines all three, and it’s very effective.

Here’s how the independent artists “Synergized” their promotion efforts—as seen in video one:

You can’t promote yourself all day and be effective. You need other people. You need to partner with others that have an audience and do what you can to add value through your music and make it a win/win.

To be effective, you can’t promote yourself manually. You need other people.

In the next section, I will explain how Independent musicians use YouTube to create a fanbase that builds itself.

If there is one thing that pays off today it’s being relatable. People connect based on common interests. It’s important to allow your personality and interests to shine through in your videos. Appeal to a group of people and create a consistent theme. Have fun!

What kind of videos should you make?

Answering these questions will help you find out:

A word of warning: People can smell BS from a mile away. Don’t try to be anything you’re not with the hopes of making people like you. Chances are they won’t.

Rule #3: How To Promote A Music Video On YouTube And Make Money

As I talked about in this article, most YouTube musicians use sites like Facebook and Twitter to funnel people over to YouTube to watch their music video. Once the video is over they ask them to make a purchase. This is called a CTA or Call To Action. I’ll explain that in a second. First:

Here’s an illustration explaining how the traffic “flows” from other locations to YouTube and then to the purchase: 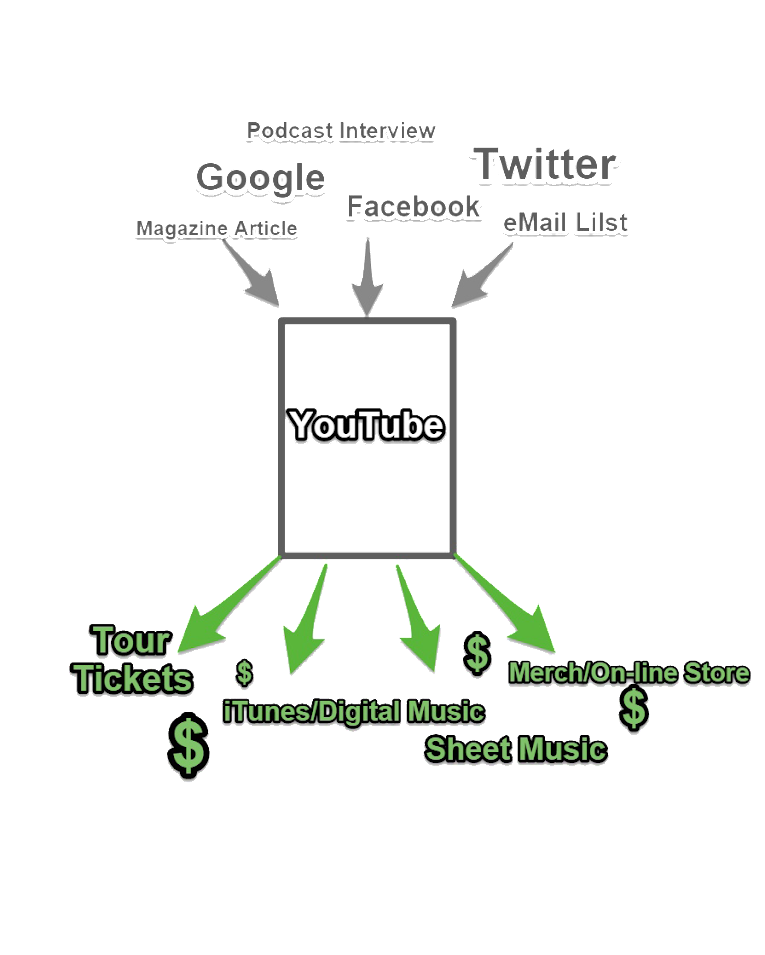 The Call To Action tells the viewer to make a purchase. Most YouTube artists place CTAs in one of three locations:

Here’s an example of a pop-up:

Here’s an example of a link in the video description:

And here’s an example of a CTA at the end of a video (red arrow): 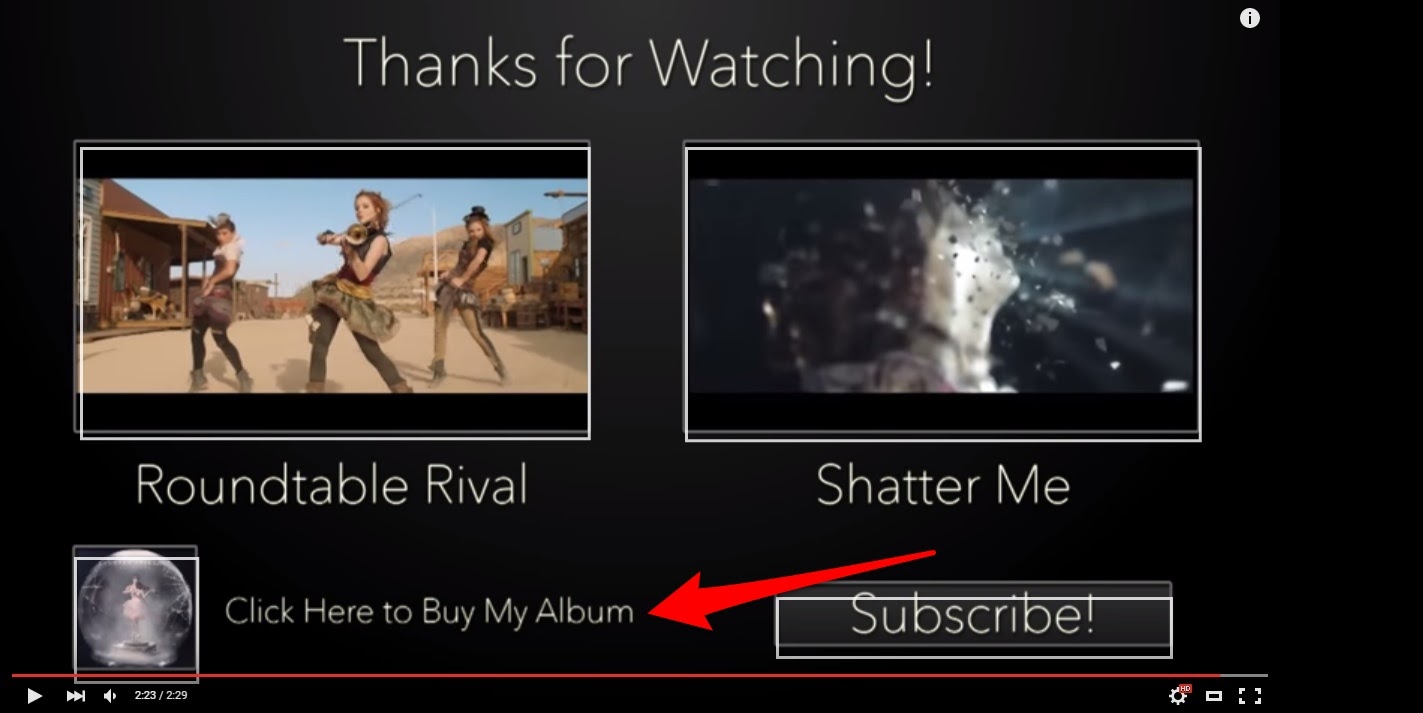 How Much Money Has This Music Video Made?

People who have been selling things online for a while say that, on average, only 1% of people who watch a video like this will actually follow through and purchase something.

Based on that percentage, we can estimate how much the video has made the artist.

Here are the numbers:

The artist uses this video to sell 4 products (see screenshot) at the following, average price points:

My nifty drawing showing the math :)

—Feel free to check my calculations. 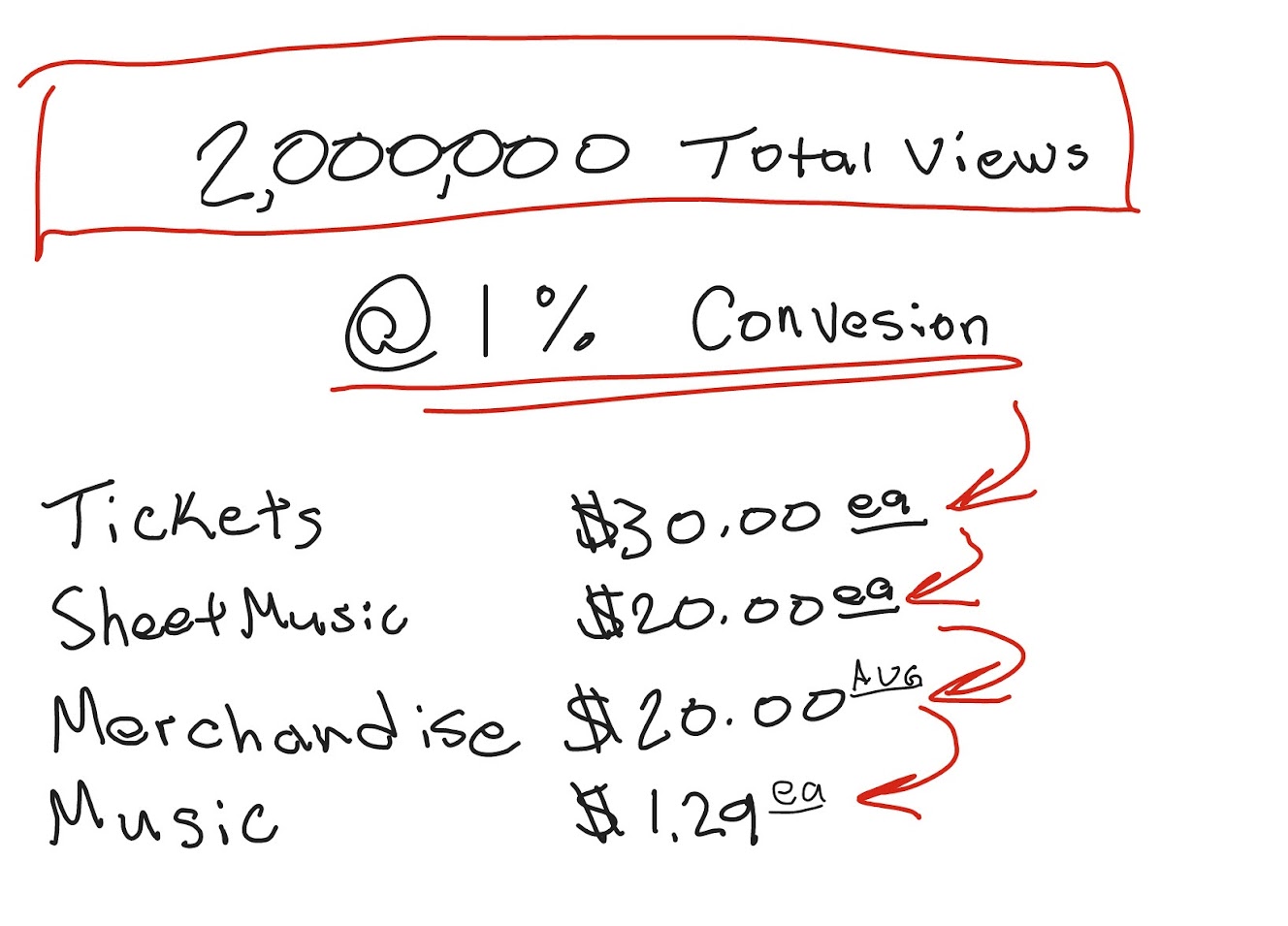 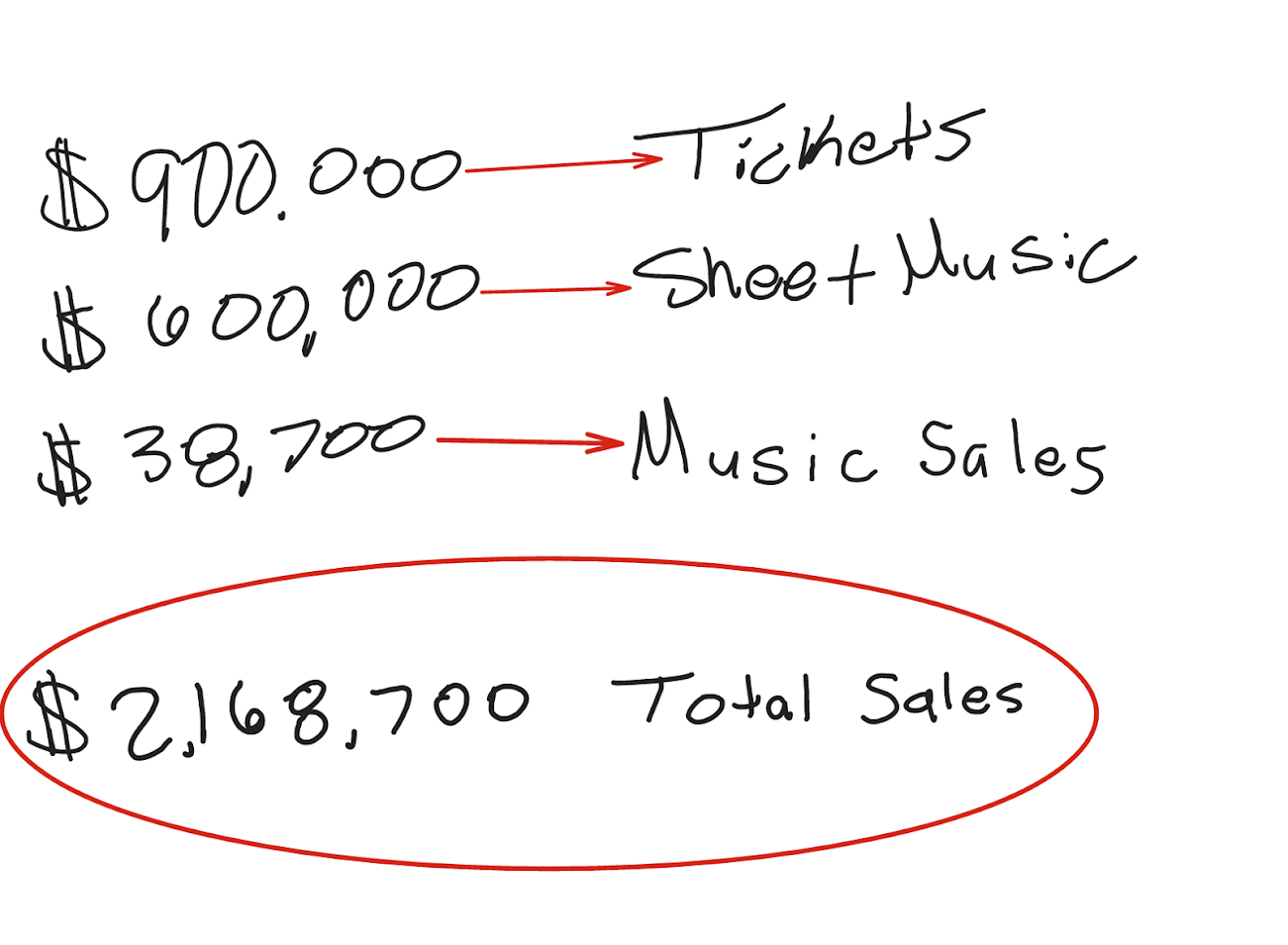 All of this was done digitally, behind the scenes, passively. And THAT is awesome!

That is a basic explanation of how YouTube works to help independent musicians make a killing without a label. Make sure you watch the videos if you haven’t already.

Everybody will do this soon. If you wait will be very, very difficult for your to move forward with these strategies.

So, quit procrastinating and get on this before everyone else catches on. You owe it to yourself and your future fans to make things happen!